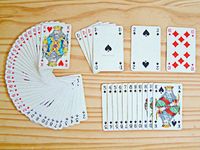 Casino (1800)
Subdomain: Abstract Games
Player Count: 2 - 4
Playing Time: 30 minutes
View Game Meta Data
View Game Ratings
Visit the BGG Page
Game Description (click to show/hide)
Casino is a fishing standard deck playing card game based on the traditional Italian game Scopa. It is one of the few card games played with all cards in a standard 52 card deck that can be dealt out evenly to 2, 3 or 4 players.

Play starts with four cards to each player and four cards to the table. Each numeral card is counted as its numerical value. The aim is to capture cards laying on the table by playing a card from hand which matches in number a table card or the sum of several table cards (for example, a 2 and an 8 can be captured by a ten). Cards can also be stacked, called a "build", to be taken next turn only if you have that card in your hand to take it later, risking their capture by another opponent (for example, a 2 and an 8 can have a 10 stacked upon it, next turn you can take the pile with another 10 and so can an opponent, capturing four cards). Face cards are captured by the same face card.

Cards must be played onto the table, called "trailing", if there is nothing to capture. Picked up cards are accumulated in a pile to be counted at the end of the round. Once all players four card hands are depleted four cards are again dealt to each player (only deal the table on the first hand of a deck). This happens until the deck is spent. Cards remaining on the table after the deck is spent are won by the last player to capture a card. Scoring depends on the variant.

Most commonly the points total 11. Per the rules published at pagat.com the scoring is as follows.

Most cards = 3 pointsMost spades = 1 point10 of Diamonds ("Big Casino") = 2 pointsDeuce of Spades ("Little Casino") = 1 points (also counted as a spade in Most Spades count)Each Ace = 1 point (4 points with the Ace of spades counting towards most spades).

A total of 11 points per deck, shuffling the deck again and starting over playing to 21.