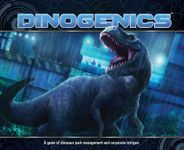 Each player is the head of their own corporation with access to their own private island resort. Each season, players assign agents to the mainland to compete over DNA and other limited resources. Once collected, players can build fences, various park facilities and populate their parks with dinosaurs. Parks with the most prestigious dinosaurs will attract the most visitors. But beware; if dinosaurs are neglected or improperly penned, they will attempt to escape and spread havoc through the entire park.

Use all the tools at your disposal; DNA splice mutant dinosaurs, exploit the Black Market or just try to run an honest park, the choices are yours.

Do you have what it takes to lead your corporation to victory?
Entries over Time Chart (click to show/hide)
Share This Page on BGG
Paste the following BGG Formatted Link into any post (click box to select all, then copy to clipboard).

Game Entries by Month
May 2021
[BGG]
Brandoshido
[WCHBP]
Entries for the month: 1