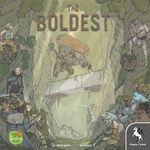 The Boldest (2018)
Subdomain: N/A
Player Count: 2 - 5
Playing Time: 90 minutes
View Game Meta Data
View Game Ratings
Visit the BGG Page
Game Description (click to show/hide)
The forgotten creatures of the forest have awoken from their slumber and nobody knows for sure what is lurking in the Iron Valley. You followed the call of your king. Now it is time for heroic deeds in The Boldest!

Defeat mechanical monsters, retrieve enigmatic artifacts, use helpful items and lead your faction to glory. Each round, three expedition leave into the unknown to explore this mysterious place. You form three groups, one for each expedition, with the heroes in your hand. Only the strongest groups can take part in an expedition, so you need to apportion your power. Can you read your opponents well enough and forestall them? Collect the most experience and become a legend! Are you worthy of the title “The Boldest”?

Max Prentis passionately created and illustrated the world of The Boldest. His love for details can be found on every card. The over 100 unique Illustrations let you delve into this rich world. Get ready to explore! Those of you who are curious and want a glimpse at the game mechanics are in luck because we want to give you a peak under the hood for the new, second game by Sophia Wagner (Noria was her first). The core mechanics of The Boldest are Hand Management, Programming and Hidden Bidding. Each player starts with a Faction consisting of 17 Starting Heroes from the 5 Classes (3 Warriors, 3 Technicians, 3 Hunters, 5 Cooks and 3 Pets). In the Planning Phase you secretly form three Groups with Heroes of the same Class behind your Screen and place them face down one Group per Planning Space.Every Hero executes a different Action in the following Action Phase but in general they let you take specific Forest Cards or new Heroes. Pets are the only exception they can be combined with any other Class. Why is that important? Because in the Action Phase only the strongest Groups can execute their Classes action. The Planning Spaces are resolved consecutively. First all players reveal their Group in Planning Space 1 and tell the other players the Class they played and the Group Strength (defined by the number of Class icons on the played cards). The strongest Group executes their action and afterwards sends their Leader to the king (this Hero is out of the game) while the remaining Heroes celebrate their success in the Party Tent. They won’t be available next round to that player. Weaker Groups keep their Heroes and get a new one as compensation.

As mentioned before, the Classes execute different Actions in a specific order: Warriors always go first followed by Technicians, Hunters and Cooks. The Cooks convince new Heroes with Special Abilities to join your Faction with their delicious dishes. The Warriors, Technicians and Hunters can take specific Forest Cards while other cards block their way. How the Forest changes over the course of three Expeditions of a round is also something you must anticipate during the Planning Phase. In the Action Phase you cannot change your Groups anymore.

After 5 or 6 rounds (depending on the number of players) the player who was able to collect the most experience will be known as "The Boldest"!

Game Entries by Month
May 2019
[BGG]
MHindmarch
[WCHBP]
Entries for the month: 1