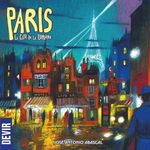 The most well-lit buildings are admired more highly by passers-by. In the first phase, players can either place tiles or grow their reserve of buildings. The cobblestone tiles are divided into 4 random spaces (their color, their opponents’ color, a streetlight or a mixed-color space where either player can build).

Then, in the second phase, players build on top of their color or the mixed spaces, in effort to position their buildings as close to as many streetlights as possible. More streetlights solicit more adoration and points. The player with the best lit buildings steals the hearts of Parisian pedestrians and wins the game.