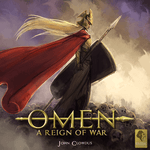 Omen: A Reign of War (2011)
Subdomain: Strategy Games
Player Count: 2 - 2
Playing Time: 30 minutes
View Game Meta Data
View Game Ratings
Visit the BGG Page
Game Description (click to show/hide)
You are a child of Zeus poised to conquer all of Greece, but first you must prove your worth to the gods, as there is another who contests your claim. To determine who shall rule, gods have devised a contest and lent their most powerful forces to both sides of the conflict.

Omen: Reign of War is a head-to-head strategic card game where you compete to gain the favor of the pantheon of gods, and prove that you are the rightful heir of Zeus. Powerful forces of antiquity and legend are at your command as you raze and pillage cities, strategically manage your resources, and eliminate your rival’s forces. Choose your battle strategy with rules for standard and draft play, and expand your war with other, fully compatible, games from the 'Omen Saga'!

Omen: Reign of War- Head to Head demigod battles for supremacy of ancient Greece.- Tactical battle card-game where every unit has its own unique abilities and uses.- Definitive Omen Saga gaming experience and endlessly expandable.
Entries over Time Chart (click to show/hide)
Share This Page on BGG
Paste the following BGG Formatted Link into any post (click box to select all, then copy to clipboard).