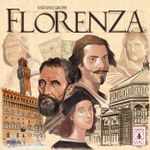 Florenza (2010)
Subdomain: Strategy Games
Player Count: 2 - 5
Playing Time: 200 minutes
View Game Meta Data
View Game Ratings
Visit the BGG Page
Game Description (click to show/hide)
In Florenza, the players are the heads of the most powerful families in Florenza during the Renaissance period. The goal of the game is to become the most famous patron of the arts by hiring the most famous artists of the period and financing their works.

Each player can commission artworks in his own district, the Cathedral, or in the civic buildings of the city. Each artwork requires money and resources to complete. To earn the money and resources the artists need, the players send their workers to labor in various workshops, possibly even in their opponents’ districts. Additional workers can be earned by offering charity to the church. During the game, players will earn prestige points, primarily by completing artworks. Prestige points can be spent during the game, but at the end of the game they will be the player’s primary source of victory points.

All of the characters in the game are real historical figures that lived and worked in Italy during the Renaissance. Most of them worked in Florence. All of the buildings in the game were real Renaissance workshops. The artworks the players can complete include the masterpieces of some of the most famous artists in the world.

Note from the designers directly from the rulebook:

"We apologize if we included some characters in the game who never worked in Florence during the Renaissance, but we wanted to include all of the most important artists (in our opinion) from that golden age of Italian art and culture. Michelangelo, for example, left an important mark on the history of the city—and the Renaissance period—even if he was only in Florence for a short time. We also added some portraits of military leaders (created by Ivan Zoni) to the rulebook. They are not involved in the game, but they were influential members of public life during this era.The names of the buildings, parts of the Cathedral, and the workshops are in the literal form they had in Italy during the 1400-1600 period. Some of them are unchanged in the modern Italian language, some have changed a little, and others have completely disappeared or remain only in some dialects. We chose to maintain those words, without translating them into a language that the real artists didn’t know. We hope you agree with our choice, and we hope you have a good time playing Florenza!"
Entries over Time Chart (click to show/hide)
Share This Page on BGG
Paste the following BGG Formatted Link into any post (click box to select all, then copy to clipboard).