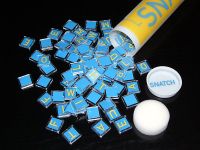 THE GAMEPlace the tiles face down and take turns to turn them over until a word of three or more letters can be made. If you see and say the word first, take it. Watch out. From now on the game has 2 sides as words are made both from the centre pool of letters or snatched from other players if changed by one or more letters. So your CAT can become their CART to be snatched away as TRACK seconds later. Play on until all 100 letters have been turned and you agree to stop playing and start scoring.

(Text is from the game's container (tube). The game is originally published by PortobelloGames (UK).)

In 2008, U.S. Game Systems changed the name to "Snatch-It" likely in response to the original name's slang meaning in the U.S.
Entries over Time Chart (click to show/hide)
Share This Page on BGG
Paste the following BGG Formatted Link into any post (click box to select all, then copy to clipboard).